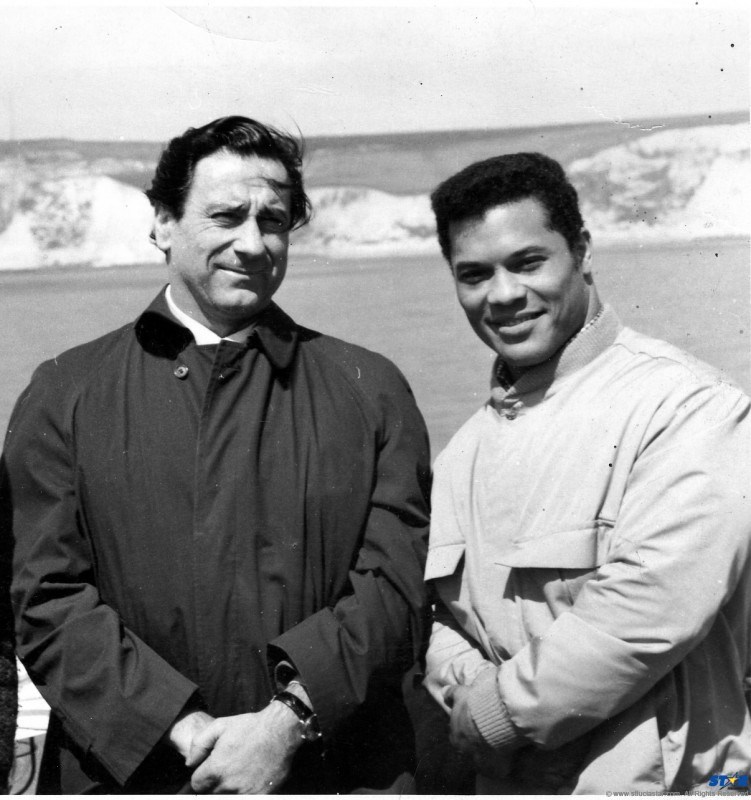 The man I hold most responsible for who and what I am today died from heart failure on Saturday morning at a Los Angeles hospital. I had first encountered him, at any rate spiritually, when I was a little over ten years old but already had been irrevocably influenced by his “you too can have a body like mine” advertisements at the back of one of my favorite Marvel comic books.

We were actually introduced in the early Sixties, after my London-based native-Barbadian friend Earl Maynard and I had been chosen by former Mr. America Ludwig Shusterich, head of the UK branch of the Montreal headquartered International Federation of Bodybuilders, to participate in our sport’s most prestigious annual event: the Mr. Olympia-Mr. Universe-Mr. America show at New York’s Brooklyn Academy of Music.

Soon after we’d checked in at our Manhattan hotel our host had showed up with popular magazine columnist and chiropractor Dr. Richard Tyler to invite Earl and me to a steak dinner at some plush Manhattan restaurant, probably now buried under the fall-out from the world economic crisis.

What an unforgettable evening we had with Dick Tyler cracking us up with his blistering wit, and one of the most famous men in the world turning out to be a regular Joe who liked nothing better than telling and retelling inspiring tales about such legendary strongmen as Louis Cyr, Eugene Sandow, the Saxon Brothers, George Jowett and Sigmund Klein, to say nothing of the day’s superstars, all of whom he claimed as students, among them Clarence Ross, Jack Delinger, Leroy Colbert, Dave Draper, Harold Poole and Larry Scott. The two last mentioned were scheduled to compete the following evening in the first-ever Mr. Olympia, after which I renamed Scott “the eighth wonder of the world!”

(Now considered bodybuilding trivia: my Bajan friend had sneaked one peep inside Larry’s dressing room and decided on the spot he wanted no part of the great Scott.   In his own best interests he chose—quite contrary to our long-established arrangements—to forget the Olympia and instead compete in the Mr. Universe event. I lost to him by a mere quarter point. We continue even today to laugh about the way our first visit to New York had turned out but the lesson I learned on the remembered night remains indelibly etched on my soul.

But then, this is supposed to be about Joe Weider, RIP. Suffice it to say it didn’t take long before we were close friends. Indeed, my name eventually became synonymous with the UK branch of Weider International, until our American boss in his undisputed wisdom decided I would be far more useful to his company operating  at his elbow—a dream offer too good to refuse, and I’ve never once regretted readily accepting: Editor-in-Chief of his flagship magazine Muscle Builder.

Many years later we relocated from a relative warehouse in Union City, New Jersey to a specially constructed plush building on Erwin Street, Woodland Hills, California. Already resident in nearby Santa Monica and taking his first baby steps to international fame was a young Austrian named Arnold Schwarzenegger, whom I had introduced to Weider several months before I transferred from the UK. (In due course I would also introduce Joe to two Saint Lucian visitors: Dave Samuels and Jeff Fedee, who were appropriately awed by all they saw first-hand at Weider Headquarters, including a life-size painting of a fellow Saint Lucian in the lobby!)

Together Joe and I traveled the world, usually for show purposes. He was always a controversial figure, for diverse reasons I need not go into here—obits in the New York Times and other newspapers feature some of them—but nearly everyone agreed he was among the most humble of men. At one point, after some over-muscled mindless ingrates had physically attacked him in his office and I’d had reason to call in the cops, Joe suddenly agreed to forget the whole incident, like it never happened.

Talk about feeling sheepish! Nevertheless I unforgettably learned on the particular occasion that forgiveness does more for the forgiver than the forgiven. Also never to be forgotten was Joe’s response when I bitterly complained that he had been too easy on his attackers. With a casual shrug and raised eyebrows, he said: “Look at it this way, Ricky, if I have to be our sport’s Jesus . . . “ For me, that was a helluva statement, especially coming from a Jew!

Quite obviously I will miss Joe, never mind I had not set eyes on him for the greater part of two decades. For some of those years we talked on the phone, wrote each other letters and I promised at his expense to hook up at this or that show in Vegas.

He was always generous to me, and not necessarily in terms pecuniary. And while many have written flatteringly about my personal contributions to bodybuilding, I have never forgotten it was Joe Weider who handed me the opportunity to hone my skills as a writer. Thanks to Joe, I had the good fortune to work closely with some of America’s most respected photographers (Zeller, Lund, Neveux, Balik) male and female physique superstars (including my wife Mae) and talented editors whom Joe had somehow enticed away from magazines as prestigious as Esquire. (There was a time, believe it or not, when the Weider magazines actually eclipsed Playboy sales—no mean feat!)

Often, after I’d handed in what I considered one of my better pieces and could hardly wait to hear the boss’ review, I would be disappointed to learn he’d not had time to read it. His usual excuse: “Ricky, your writing is like a gourmet meal, why don’t you allow me to sit down and enjoyeee it at the weekend, at my own pace!” I’ve never forgotten the unique sound of that word as it fell out of Joe’s mouth. Enjoyeee!

Pure heaven, I tell you. What’s more, I knew he meant it.

Not that he always took such pleasure from everything I wrote for his magazines over 30-something years. On a particularly memorable occasion he took me to lunch (he often did, truth be told, and paid—contrary to his cheapskate reputation!) so we might “have a little talk.” However, for most of the meal, he was near silent. And then, coffee served, he addressed me without the smallest preamble: “Ricky, why do you always have to argue whenever I ask you to write something you don’t agree with? Why can’t you be like Armand [Tanny, a longtime Weider columnist and former Mr. America, alas deceased). He writes whatever I ask. He doesn’t have to like it. Now that’s a real pro for you.”

I’m afraid my response was typically wiseass. “And I take it you know that pro is not only short for professional,” I said. “It’s also short for prostitute!”

Joe’s reaction? Zero. It was as if I had not spoken.  As I think about it, he probably never heard a word of what I’d said. He had told me what was on his mind; time to move on. Besides, he knew me well enough to be certain I would remember his advice, regardless of my smarty-pants response.

Another time, the morning after we’d had a heated exchange in the presence of a visiting friend Joe wanted to impress (I had been unaware of this until it was too late) about the Israelis selling arms to apartheid South Africa, the boss summoned me to his inner sanctum at Erwin Street. “Ricky,” he said, “you’re a pretty smart guy. That’s obvious. So why do you have to prove all the time how clever you are?”

Caught totally off guard, I could only ask: “What have I done now, Joe?”

“About yesterday evening,” he said. “Sometimes it’s good to let the other guy win an argument—even if you know he’s talking rubbish. The guy’s gonna go home and he’ll be thinking all the way about what went on earlier, and then he’ll say, ‘That Ricky Wayne, such a nice guy. He let me win the debate even though he was right and I was wrong!’ ”

How to react to something like that? I said, “Okay, Joe, I’ll keep that in mind.” Of course, in 2 Corinthians 11-19, Paul had said something similar: “Ye suffer fools gladly, seeing ye are yourselves wise.” But then Paul was being purposefully sarcastic!

I’m sure Arnold would have no problem acknowledging that without Joe Weider there would have been no Terminator as we know it, no Governor of California  named Schwarzenegger. I certainly have good cause to say I have absolutely no idea what my own life might’ve been like without Joe’s lasting influence—and his unlimited patience.

I leave to speak for themselves the other thousands, no, millions, the world over, (his magazines were at one time translated into 36 different languages, including Arabic) whose lives were in one way or another touched by this man who, with his brother Ben (deceased) had dropped out of school at 12 to become multi-millionaire magazine publishers and pioneers in the business of health promotion.

It remains to be said that bodybuilders of color owe Joe Weider a special debt: until he and Ben started publishing their magazines and created the IFBB, the winners of the AAU Mr. America contest promoted by Bob Hoffman’s outfit York Barbell Club, were all white. Without Joe Weider, I dare to say, such legendary stars as George Paine, Leroy Colbert, Arthur Harris, Sergio Oliva, Harold Poole and Lee Haney might never have taken their rightful place at the front of the bodybuilding bus, let alone appeared on the covers of their sport’s magazines.

Joe Weider leaves to mourn his second wife Betty and his daughter from his first marriage Lydia. Joe Weider was 93.

Written by Rick Wayne for the St. Lucia Star